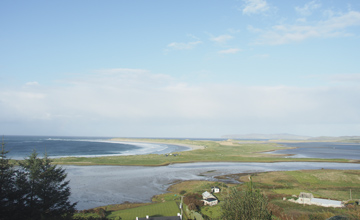 Once again autumn saw me, unlike sensible sun-seeking surfers, heading north for 4 weeks of wave clinics in Donegal and then Tiree.
‘Expect the unexpected’ is the mantra for those attending these wave clinics. But what the attendees didn’t expect for the first 2 weeks was temperatures in the 70s and sunburned feet. When we turned up at Dooey beach under cloudless skies and sailed head-high waves in side off, 20 knot winds wearing short arm summer suits, they couldn’t quite believe where they were. But that’s how it stayed – an Indian summer of  Indian proportions – but the great thing about this Indian summer was that it brought both waves and tepid SE winds.
Neither of the first weeks were crazy windy – but  we sailed most days – and on the days we didn’t, we surfed and SUPed. But as people are discovering more and more every year, the best wave sailing weeks are the ones with a mix of winds – and the best wave sailing days are often non planing – when you have to play the game of chess to negotiate the bombs and and manoeuvre into position like a surfer.

Once again we stayed at the ever more welcoming Loch Altan Hotel, where we are treated like a long lost family. My personal crowning moment were the world cup rugby breakfasts – where a banquet style table was positioned  in front of the big screen at 8 am so we could watch the home nations take on the world over a ‘Full Irish.’ – what a way to start the day!

The time goes so fast when you into the Donegal routine of breakfast, morning briefing and video analysis followed by a detailed study of the weather map and the decision where to sail. That’s another beauty of Donegal, no day is the same.
Magheroarty, the scene of the 2019 Red Bull Storm chase, is our favourite beach  because being a bay it’s relatively safe – but it also caters for a wide sweep of wind directions AND has one of the best reef breaks in Europe – and has the famous Ballyness Bay behind  – a lagoon that fills up at high tide and provides us with one of the best flat water training grounds anywhere. However, on some courses we’ll sail at 5 different venues .

Lorenzo
By the final week the general weather pattern was beginning to change and all the talk in the bar was about the approach of the infamous Hurricane Lorenzo. In the end it swung south and gave Kerry and the  south of Ireland quite a battering – but up north we just got a gentle caress – a mere 30 knots. The winds came from the SE,  brought no swell, so we headed to beautiful Marble Hill for a bump and jump session few will forget.

And so to Tiree.
My final week saw me cross the Irish sea from Belfast to Cairnryan, drive to Oban and then take the Calmac ferry to the Scottish Hawaii they call Tiree. As the course approaches, we keep an interested eye on the weather – on the one hand craving a good run of wind – but not so much that the ferry stops running – a fate that befell us 2 years ago and left us stranded in Oban for 2 days.

This year the Gods were kind. We travelled over on glassy seas, enjoyed 5 days of 30 knot westerlies and then travelled back once again on mirror seas.
Having so much wind was interesting. In reality most people have 2 days of being over-powered on the edge before they’re crying out for a break – but the Tiree posse, led by the resilient female group of Viki, Ruth and Rayne, were on it for 5 hours a day.
These actually were the Tiree conditions I crave. When a big west or SW swell hits the island, it refracts around and comes into the south facing beaches of Gott and Crossapoll in clean head high lines – and the westerly winds are a free degrees offshore to give us dreamy down the line riding.
Did we need 30-40 knots to enjoy such waves? No – but we put up with them!

There was a truly great moment on Friday – the last day of the course. I have to admit energy levels were a little low to begin with but gradually everyone got out there and enjoyed the session. By 4pm we looked at each other, made the ‘glass to mouth’ move – the international sign that means ‘lets have a drink.’ And at the moment the wind shut off completely and we retired to the Tiree Lode hotel for a beer to celebrate a fabulous week in the best company.

All being well with health and the world, I will be returning to Donegal and Tiree in 2020 – dates will appear here on my site at the beginning of 2020.

Check out some highlights